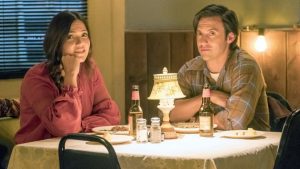 I may be in the minority, but I love the Vietnam episodes. They feel like mini-movies, with the music from the era and the setting of Asia in wartime. Tuesday’s episode is no exception. We learned so much more this week about Jack and Nicky, not to mention, Jack and Rebecca. The road trip, the “grandpa” pajamas, the way Jack finally showed some emotion—such a rich backstory for our favorite Us union! SWOONING.

2. Jack finds Nicky in Vietnam, strung out on drugs and mentally hanging by a thread. “Superman is just a nickname,” Nick spits in Jack’s face. (Knife to the chest!). Nick’s superior officer gives Jack and earful about Nick being “insubordinate,” and “partying like it’s Woodstock.” Unfortunately, Jack can’t just sweep in and save the day. “We don’t put brothers in the same outfit,” the officer says. Makes sense, but how will Jack help his brother?

Is it me? I find Nick to be very unlikeable, surly, and closed off. We love Jack for wanting to save his brother, but do we love the brother?

3. Back on the homefront, post-Vietnam, Jack and Rebecca take their budding romance on a road trip to L.A. It’s really sweet and all, but Jack sure is tight-lipped about absolutely everything–his family, Vietnam, and his reasons for visiting some folks in Recida. Good thing he’s adorable and perfect in every other way!

4. Jack’s not the only one keeping things close to the vest. As Zoe and Kevin embark upon their Vietnam adventure, Zoe puts up an emotional Fort Knox against Kevin’s questions about her childhood. Turns out, she has a really legit reason why.

5. Smitten! Jack and Rebecca are, for sure. And aren’t we all with the two of them? I love how she shares her dream of singing and he just listens as if she is the most valuable person in the world. They share a slow dance and Rebecca reveals she’s an easy cry. Not me, says Jack. I keep my emotions balled up inside. (Except, as we later discover, in the presence of the most valuable person in the world!).

Favorite line of the night: “I think my grandpa had those pajamas.” I dunno, to me they looked super cozy and yummy. And obviously, she could have been wearing a snowsuit and passion still would have ensued.

6. Kevin and Zoe nosh on some kind bat pho, which later makes Zoe sick (girl, I was so sympathetic about you eating bat that I almost felt nauseous myself!). At the market, Kevin sees a display of the exact same necklace as the one he received from Jack. He’s bummed to find out there are so many of them. “I thought (the necklace) had this epic origin story.” STILL: The writers have been really investing us in the necklace for ages. This can’t be the end of the necklace story. Oooh, I can’t wait to see what plot twist they have in mind for connecting the necklace with the Mystery Lady.

7. Jack obviously sustained some emotional trauma from the war. He freaks when a champagne cork pops off loudly, like a shot. He tells Rebecca he can’t talk about Vietnam with anyone, not even her. Our Jack is just so hard on himself, isn’t he? Breaks my heart to think about all the heavy, unnecessary burdens he carried. Oh, the humanity of it! Later we find out about his secret trip to Recida: “I was responsible for your son’s death,” he solemnly tells the grieving parents of his Vietnam buddy. “Taking my eye off your son was the worst thing I did.” Somehow, Jack got the memo that he was responsible for absolutely everyone’s safety and happiness. I loved the scene where the dead soldier’s parents bless Jack with pure grace. “It wasn’t your fault, son,” the father says gently. And it wasn’t. Everyone knows this but Jack. Will he start to believe it?

8. Rebecca’s meeting with the record label is life-changing, but not because it was a doorway to her dreams coming true. Rather, the record label execs’ apathy to her voice and music cause her dreams to shapeshift. “You’re Pittsburgh good,” they say. Soul crushing for some, but for Rebecca, it’s a traffic light: Go home to Pittsburgh and keep singing anyway.

9. Zoe, convalescing in their hotel bathtub, hears something earth-shattering (in a good way) from her beau: “I’m falling in love with you whether you open up to me or not.” It’s an offer of love without conditions, and it works as a balm to Zoe’s damaged heart. She’s falling for him, too! Suddenly, Zoe feels safe enough to tell Kevin something horrendous, that her dad sexually abused her when she was a little girl. She feels safe, but it’s still excruciating, and I could not rip my eyes away from her scared, brave face. Her emotions ricocheted from fear to love to vulnerability and back again. The amazing Melanie Liburd as Zoe gets my Performer of the Week.

10. Nick’s superior officer risks it and decides to drop off Nick to Jack’s unit for two weeks. Yeah, I think we all know something bad happens during those two weeks. Well, now we have Jack, Nicky and the Mystery Woman, whom Jack spots in the middle of the night, all in the same location. Hmmmm!

11. My favorite scene this week was when Rebecca gets in the car with Jack. She has just been handed bad news regarding her singing career. He has just been handed grace on a platter from the dead soldier’s parents. Because of “Bec’s” openhearted ways, she reveals a piece of her heart, and so does Jack, in another way. As she sings the song from the audition, Jack’s protective walls crumble just for a few minutes, and he cries over what’s been lost. With a heart cleansed by tears, he is ready to open himself to deep intimacy with this sweet songbird. He places his hand over hers and they go home–together.

As for next week’s previews, I CANNOT WAIT! Finally, we will know more about the Vietnamese lady, the necklace, and Nicky. Looks like William will be there for Thanksgiving somehow, too, in the current timescape. Don’t know how it’s possible but I DON”T CARE! These writers will whip up something satisfying for us all this Thanksgiving.

Well, what did YOU think?

Why do you think Jack is so hard on himself? What do you think will happen in the two weeks with Nicky in Jack’s unit?

How will the necklace connection play out?

Favorite scene? Line? Performance? Is Zoe growing on you guys as much as she is growing on me?

Tell me everything and you will be entered to win a Season 2 soundtrack of This is Us!

Hey! Thank you for coming to see me on my new blog: "Peace, Love, and Raspberry Cordial"! What does PLRC mean? It ties … END_OF_DOCUMENT_TOKEN_TO_BE_REPLACED