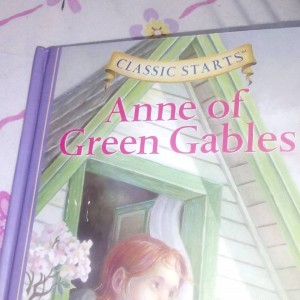 Aha! Victory is mine!

I just wandered into my 10 year old’s room and spotted an abridged version of “Anne of Green Gables” lying open on her bed (last night she fell asleep reading and I gingerly took a book out of her hand in the dark. Didn’t know it was the Best Book Ever).

I’m not going to pretend this isn’t my dream come true: to get my very own girl child into the pages of the book that shaped me as a human being!

Yes, since Phoebe was a baby, I’ve been dreaming of brainwashing her into loving Anne as I do. As she grew, and it became obvious my girl was all “spirit, fire and dew” like Anne, I knew it HAD to happen. I also knew that it wouldn’t be easy. Kids don’t automatically love what their parents love, because of that whole SEPARATE PERSON thing.

And the little cherubs seem to have a sense for when Mommy might want something a little too much, and they can, being AUTONOMOUS INDIVIDUALS, run in the other direction.

Also, P is a reluctant reader. Boys are supposed to be the ones who kick and scream at books, but in our case, it’s been our girl.

So I had to maneuver carefully as I endeavored to drag my daughter into life as an Anne Freak. I knew it had to seem like it was  all her idea.

I’ve heard it over and over: “I can’t wait until Olivia Anne is old enough to read ‘Anne of Green Gables,'” mothers will tell me, their faces alight with book love and hope.

It’s harder than it looks, but it can be done. Here are my 9 Strategies for Luring Your Daughter into Loving Anne Like You (We) Do:

1. Keep in mind that Anne and the 7 sequels are really best suited for teenagers and even adults. L.M.M. was a highly sophisticated writer, and her fat, buttery words and eloquent sentences will only bog down a younger reader not ready for the original.

2. Pretend you don’t care. This is absolutely key. When you have a kid like mine whose automatic answer is “no,” you have to be subtle. “Darling, I would self-actualize and float into orbit if only you cared about Anne!” is not a good tactic. If she shows any resistance to reading Anne, just let the matter drop. Even better, set the stage for success…

3. Read the Young Readers version with her. Get a hold of a picture book version of Anne’s story. Phoebe loved to look at the pictures in this version. In fact, it was during the reading of this that she, then 7, asked me “what’s an orphan,” which sparked my new book!

4. When she’s cracked the code of reading, offer her an abridged version, like the one I caught P reading. But if she balks, drop it but do leave AOGG lying around where she can pick it up. (I must have dug that book out from piles ten times and placed it on her bedside table, shhhhhh!)

6. Go to Bed 30 Minutes Late: Give her the option to stay up a bit late with the agreement that she has to read during that time.

7. Watch the Movie: The luminous four-hour miniseries will engage your girl as it did mine with Anne and co. P totally went ape over the Anne-Wallops-Gil-on-the-Head-with-a-Slate scene, and she was hooked.

8. Listen to the Audio Book: On a long car ride, or maybe just daily shuttling around, pop in the book’s audio version. We did this on the way to PEI, and even the teenage boys laughed and listened. Who doesn’t love having a story read aloud to them?

9. Make Raspberry Cordial: If your girl loves to cook and bake, it’s easy enough to make a scrumptious batch of Raspberry Cordial with her. This is fun, and allows the two of you to enter Anne’s world in a very tactile, flavorful way! (Google the recipe or watch for it here on the blog soon!)

Hey! Thank you for coming to see me on my new blog: "Peace, Love, and Raspberry Cordial"! What does PLRC mean? It ties … END_OF_DOCUMENT_TOKEN_TO_BE_REPLACED